Yesterday in the Hague, Radovan Karadzic was convicted for 40 years for his role in the Bosnian war. The Balkans war in the 1990s was one of the nastiest conflicts in the post war period, creating ethnic divisions which still exist today, and featuring war crimes on a scale not seen in Europe since WWII. From the Reuters report of the conviction;

Judges said the 44-month siege of Sarajevo could not have happened without his support; that he committed crimes against humanity in an attempt to purge Muslims and Croats from parts of Bosnia; and that he had intended to eliminate the Bosnian Muslim males of the town of Srebrenica.

Karadzic is one of the key defendants pursued by the International Criminal Tribunal for the Former Yugoslavia (ICTY), superseded in authority only by former president Slobodan Milosevic, who died in custody in 2006.

What some people may not know is that statistical analysis of migrational movements and killings was one of the ways external observers demonstrated that there was a systematic campaign of ethnic cleansing in Serbia. The data is currently contained on the site of the Human Rights Data Analysis Group (HRDAG), along with links to the reports submitted to the ICTY, where it shows that data was integrated from a huge variety of sources such as the records kept by Albanian border guards, interviews conducted by HRW and the OSCE amongst others, and records of exhumations conducted by teams from the ICTY. 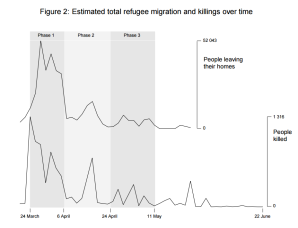 The data revealed that patterns of killings and refugee flows were in peaks and troughs, occurring at the same times and places, to a degree which is statistically implausible to be random – their co-occurrence suggested a common cause and that these were not independent events. Analysing three potential causes (the KLA, NATO, and Serbian forces), the analysts considered the patterns of military actions of all three forces. Both KLA and NATO actions occurred at the “wrong” time relative to killings and migrations (mostly after peaks), while a distinct drop in killings and migrations occurred during a unilateral ceasefire declared by the Serbian forces in recognition of Orthodox Easter in 1999. Correlation is not causation, but combined with the interview evidence conducted by many agencies, the data supported evidence against Serbian forces.

You can read the whole report submitted to the ICTY here, which is where the above chart came from. The initial report is 15 pages, with a huge appendix detailing data sources and analytical techniques. Patrick Ball and Jana Asher, two of the statisticians who worked on the report, also published a report in the journal Chance, detailing their activity. Don’t forget to visit the HRDAG to find the data they used, and learn about other projects they are working on.